That’s when the No. 1 seed Cavaliers tipped off against the No. 16 seed, the University of Maryland-Baltimore County Retrievers, in the men’s college basketball tournament.

The tip-off of that first-round 2018 tournament game was the mundane beginning of what would become the most stunning upset in tourney history. It was also one that would shock not just the college basketball world, but the entire sports world.

With around one minute left in the game, UMBC hit a corner three, leading announcer Jim Nantz to utter the unbelievable:

“Twenty-point lead. And the greatest upset in the history of this tournament is going to happen.”

For Virginia fans, the team’s 74-54 loss to UMBC was a nightmare. Harrison Keevil, a diehard ’Hoos fan and owner of Charlottesville dining hall Multiverse Kitchens, remembers the night well.

“I was with my family watching the game on our kids’ Spring break,” Keevil recounted. “It was probably at halftime when I thought to myself that this might happen. I just thought this could be the most Virginia thing to happen since the Chaminade game.”

“The Chaminade game” refers to the program’s historic loss to Chaminade University, an NAIA school, in 1982. And though the sense of doom brought up old memories, Keevil’s thoughts turned to the UVA players as the game came to an end.

“As the buzzer went off, I really just felt so sad for those kids,” he said. “I realize that these are kids who are working so hard in school and on the court. And when you see them experience a loss like that, you can feel the pain of a kid.”

That pain was felt from the bottom of the UVA lineup all the way to the top, and extending to head coach Tony Bennett. The magnanimous captain of the Cavaliers ship was eloquent in post-game interviews, hinting that the loss wasn’t the end of the story for his program:

“We will have some tough nights, because you’re so close you could taste it, but absolutely joy will come in the morning for what these guys have established for Virginia basketball.”

Heading into the 2019 March Madness tournament, the Cavaliers were arguably an even better team than they were the year before. Redshirt sophomore DeAndre Hunter, who missed the 2018 tournament with a wrist injury, became the team’s star player both for his offense and unforgiving defense.

Despite all that momentum, the team found itself down double-digits against No. 16 seed Gardner Webb. It seemed like 2018 was happening all over again. But for Keevil, he said the vibe was different even though UVA was once again down big against an underdog.

And the ’Hoos didn’t.

They fought back to win their first-round matchup. Then they went on to down Oklahoma and Oregon on their way to the Elite Eight.

Keevil went into the tournament hoping UVA could get to the Elite Eight. His wish came true after the Cavaliers beat Oregon by four in the Sweet Sixteen.

The next three games were incredible, and perhaps the most exciting and improbable final three games in any NCAA championship run.

Virginia was down two to Purdue with 5.9 seconds left. Ty Jerome was at the line shooting a free throw. He missed, big man Mamadi Diakite batted the ball into the backcourt, and guard Kihei Clarke recovered the ball with 3.7 seconds left. He took a couple of dribbles, rifled a pass to Diakite, who caught the ball and buried a quick jumper with no time left. Virginia went on to win in overtime.

Virginia then squared off against Auburn in the Final Four. The Cavaliers were down four with 17.6 seconds to play. Guard Kyle Guy buried a corner three with 7.4 seconds left to bring the Cavs within one point. Auburn hit one of two free throws to push their lead to two. Then, with 1.5 seconds left, UVA inbounded the ball and found Guy in the corner for a three. Guy missed but was fouled and buried all three of his free throws to win the game.

Destiny seemed to be on UVA’s side as it entered the NCAA Championship game against the Texas Tech Red Raiders. And that’s certainly how it played out in the first 10 minutes of the game. The Cavaliers jumped out to a 10-point lead. However, Texas Tech clawed back to take the lead with less than 3 minutes to go. But UVA went into halftime ahead by three after a Jerome triple.

The first-half script repeated itself in the second half. UVA led for all but the final three minutes of the second half and held a 10-point lead at one point. However, the Red Raiders battled their way back to take a three-point lead with 22 seconds left in the game.

The ’Hoos reached into their bag of tricks one more time, with De’Andre Hunter burying a three from the corner to tie the game at 68-68. Jump to overtime. Virginia was up by two points. Texas Tech guard Davide Moretti grabbed a rebound on a Jerome miss and dribbled up the court.

When Moretti crossed half court, Hunter was there to meet him. Hunter knocked the ball out of Moretti’s hands. The officials gave the ball to Texas Tech. However, after an agonizingly long review of the play, officials determined the ball hit Moretti’s finger before it went out of bounds.

“I think my favorite part of the game, and the moment when I knew these kids were going to win was when the out-of-bounds call got reversed,” Keevil said. “The whole time they were analyzing the play – I felt the longer it took the more there was going to be a change and be our ball.”

UVA went on a 6-0 run after the reversal, putting the game out of reach and finishing the Cavaliers’ miraculous turnaround. The first No. 1 seed in tournament history to lose in the first round, one year later, won its first national title. 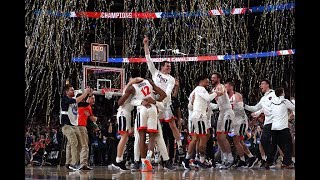 Keevil watched the waning seconds of the championship game at his home. It was late, and he was the only one up:

View all posts by JR Duren