A new 30-second TV commercial has debuted that focuses on Bristol casino jobs.

Officials released the video on Tuesday. In it, Bristol residents and local leaders discuss their support for the potential Hard Rock Bristol Hotel and Casino.

The Bristol casino commercial is part of a final promotional push for the potential $400 million project.

On Nov. 3, Bristol voters will cast ballots and determine if the referendum is successful. If so, the southwest Virginia city will move forward with its preferred casino partner, Hard Rock International. 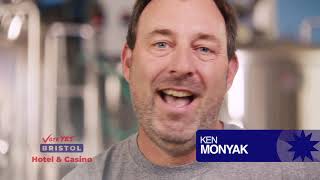 Last month the project’s founding partner, Jim McGlothlin, wrote an open letter to Bristol residents. In the letter, he implored voters to approve the ballot measure.

McGlothlin focused on how the project’s annual tax revenue would be equivalent to nearly half of the city’s existing budget.

In the commercial, McGlothlin and Bristol’s leaders argue that it would also be a massive job creator.

“We’ve got this one shot to make it happen,” McGlothlin, who is also the CEO of The United Company, says in the video’s closing.

The spot boasts that Hard Rock Bristol Hotel and Casino would generate more than 2,000 jobs. Previously, officials said they’d have an average salary of $46,500. The area’s average salary is currently $37,844.

Officials also said the number of jobs could swell to 5,200 within seven years. Additionally, the project would create temporary construction jobs as the former Bristol Mall site is refitted for the resort.

In all, Hard Rock Bristol Hotel and Casino would have a 100,000-square-feet casino, 600 hotel rooms, a 25,000 square-foot sportsbook, conference space and 50 retail shops and restaurants.