Saturday’s UFC 260 main event and rematch between champion Stipe Miocic and challenger Francis Ngannou is a big and beefy one.

Literally. Figuratively. Possibly even monetarily – for them and you.

In the pay-per-view headliner, the two big men clash in one of the most anticipated bouts of the year. It’s also one of the most meaningful heavyweight title fights in MMA history.

And thanks to a UFC 260 promotion, new DraftKings depositors can turn $1 into $100 if they correctly predict the winner of the can’t-miss MMA fight.

Want to cash in on the 100-1 promo for UFC 260? You need to choose either Miocic or Ngannou as the winner of Saturday’s bout in Las Vegas.

First, though, a few ground rules:

Who wins: Miocic or Ngannou?

Miocic opened as a +190 underdog for UFC 260. However, the line has since tightened up considerably.

As of Wednesday afternoon, odds for the five-round fight were closing in on pick’em status. At DraftKings, for example, Ngannou (-120) was only slightly favored over Miocic (-102). With a regular bet at those odds, you would have to wager $12 on Ngannou to net $10 in profit. Conversely, you’d need to bet $10.20 on Miocic to score $10 in profit.

The fight will likely draw heavy betting interest on Saturday, despite March Madness also continuing this weekend. But just so we’re clear: People aren’t tuning into this fight for trash-talk and pre-fight posturing. There’s no bad blood or heated rivalry between Miocic (20-3) and Ngannou (15-3).

No, these lovable galoots couldn’t cut that type of promo if their life depended on it.

Miocic and Ngannou first fought in 2018. Miocic, 38, won every round en route to a unanimous decision victory and successful title defense. It was, quite frankly, an unusually uninspired performance for Ngannou.

However, the 34-year-old Cameroonian-French fighter, who has a truly remarkable life story, has since reclaimed his former ultimate-intimidator status. In fact, he’s won four straight fights by knockout. The average time of each victory? Just 40.5 seconds.

I mean, just look at what this man is capable of:

Still, it could be foolish to ignore the perpetually overlooked Miocic, who holds essentially every meaningful UFC heavyweight record.

He might talk like he’s got a mouth full of gravel, but he’s got some rocks in those hands: 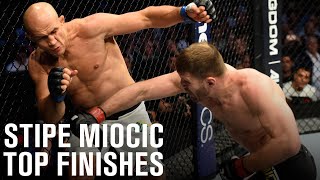